Re: Selecting Hardware for Music Production

A sound card has a hardware buffer that stores recorded samples. When the buffer is sufficiently full, it generates an interrupt. The kernel sound driver then uses direct memory access (DMA) to transfer samples to an application buffer in memory. Similarly, for playback, another application buffer is transferred from memory to the sound card's hardware buffer using DMA.

The size of the buffer can be programmed by ALSA library calls. The buffer can be quite large, and transferring it in one operation could result in unacceptable delays, called latency. To solve this, ALSA splits the buffer up into a series of periods (called fragments in OSS/Free) and transfers the data in units of a period. 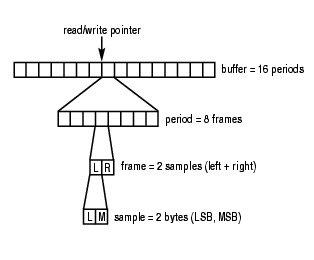 A period stores frames, each of which contains the samples captured at one point in time. For a stereo device, the frame would contain samples for two channels. Figure 1 illustrates the breakdown of a buffer into periods, frames and samples with some hypothetical values. Here, left and right channel information is stored alternately within a frame; this is called interleaved mode. A non-interleaved mode, where all the sample data for one channel is stored followed by the data for the next channel, also is supported.

Over and Under Run: XRuns

When a sound device is active, data is transferred continuously between the hardware and application buffers. In the case of data capture (recording), if the application does not read the data in the buffer rapidly enough, the circular buffer is overwritten with new data. The resulting data loss is known as overrun. During playback, if the application does not pass data into the buffer quickly enough, it becomes starved for data, resulting in an error called underrun. The ALSA documentation sometimes refers to both of these conditions using the term XRUN. Properly designed applications can minimize XRUN and recover if it occurs.